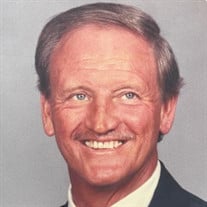 James Edward Harkins, born on September 17, 1932 to A.D. and May Harkins of Greenwood, FL, passed away peacefully on June 19, 2021.  He graduated from Starke Military Academy continuing on to graduate from Florida State University as a part of the class of 1955. While attending Florida State, he was an active member of Alpha Tau Omega Fraternity and the FSU’s Flying High Circus. Jim worked at the Lafayette Park Recreation Center in Tallahassee before moving back to Marianna in 1959 where he purchase the Dairy Queen. This began his over 50-year business career in the community. Throughout his career, he owned nine restaurants and was involved in various other business ventures, with the most notable being Jim’s Steakhouse. He built and opened Jim’s Steakhouse in 1974 and it is still in operation today as Jim’s Buffet and Grill. He loved Marianna and was a very active member of the community. He was a lifelong member of the First United Methodist Church of Marianna. He served on the Marianna City Commission twice and served as mayor in 1977. He was a member of the Jaycees, Chamber of Commerce, March of Dimes, Habitat for Humanity, The Elks and the Kiwanis Club, as well as being a volunteer firefighter. He loved to serve his community in any way he could, whether that be by donating record amounts of blood or quietly helping those in need. Jim was a true fitness enthusiast all of his life. He loved lifting weights, long-distance biking, racquet ball, and gymnastics. His passion for fitness ran so deep that he even set up his own gym at his home where he would train young athletes. He continually challenged himself and pushed the limits to see what he could accomplish. Last but not least, Jim was a fabulous dancer, especially when he was dancing with his sweetheart, Toollie. He was preceded in death by his parents A.D. and May Harkins; his sisters, Mary Dewey, JoAnn Swann, and Jean Smith; and his brother, John Harkins.  Jim is survived by his loving wife of 66 years, Toollie; his son, James Harkins, Jr. of Marianna, FL; daughter, Mary (Victor) Gavalas of Tallahassee, FL; son, Allen (Jennifer) Harkins of Marianna, FL; and a special nephew, Michael Dewey of Montana. He is also survived by six grandchildren, James Harkins III of Hawthorne, FL, Jaime (Blake) Elkins of Charlotte, NC, Bailey Harkins of Tallahassee, FL, Nicholas Gavalas of Tallahassee, FL, Mary Beth Harkins of Marianna, FL, and Lauren Harkins of Marianna, FL.  Services will be Thursday, June 24, 2021 at 11:00 AM at Marianna First United Methodist Church with Dr. Nathan Attwood officiating and James & Sikes Funeral Home Maddox Chapel directing. Visitation will be Wednesday, June 23, 2021 from 4:00 to 6:00 PM, in the Wesley Center at Marianna First United Methodist Church. Flowers are accepted or donations to Habitat for Humanity, 4736 US-90, Marianna, FL 32446, or the First United Methodist Church of Marianna, 2901 Caledonia St, Marianna, FL 32446, in his memory.

James Edward Harkins, born on September 17, 1932 to A.D. and May Harkins of Greenwood, FL, passed away peacefully on June 19, 2021.  He graduated from Starke Military Academy continuing on to graduate from Florida State University as a part... View Obituary & Service Information

The family of James "Jim" Edward Harkins Sr. created this Life Tributes page to make it easy to share your memories.

Send flowers to the Harkins family.