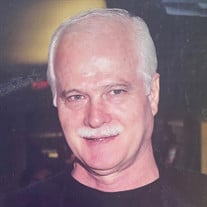 William Saunders McMullian, of Marianna Florida, passed away on February 23, 2022 in New York City. The son of the late Andrew Jackson McMullian and the late Willie Ross McMullian, born on July 6, 1940, was delivered by his grandfather, the late, Dr. Ryals.   Saunders graduated from Marianna High School and played center/linebacker for the Bulldogs. He received a scholarship to play football at the University of Florida, later transferring to Florida State University, where he graduated with a BA in Education (1962).   He went on to serve his country in the Marines, assigned to the carrier division during the Cuban Missile Crisis as well as the Vietnam conflict. Thereafter, Saunders returned to FSU for his Master’s Degree in Art Therapy.   Saunders had a daughter named Christy in 1968 with his previous wife, Julianne.   Mr. McMullian went on to a distinguished career in Art Therapy in a variety of institutions and correctional facilities. He received a National Endowment for the Arts, specifically for the US Bureau of Prisons. His landmark work continued at Bellview Hospital in New York City, where he would meet his future wife, Sara Friedman, where she worked as Creative Arts Therapist. Saunders most recent job was at the VA Hospital in New York City.   Saunders and Sara enjoyed a life together for 33 years, mostly living in New York City, where he finally succumbed to Bile Duct Cancer.   Saunders is survived by his wife, Sara; his daughter, Christy Gumberg (Andy); grandchildren, Carly and Jordan; siblings, Amos McMullian (Jackie), Andy McMullian, Cherry Klappas (Tony); and many nieces and nephews.   Funeral services were conducted at 2 PM Saturday, March 5, 2022 at Dellwood Methodist Church. Interment followed in Dellwood Methodist Cemetery with James & Sikes Funeral Home Maddox Chapel directing. In lieu of flowers, donations may be made to Memorial Sloan Kettering Cancer Center at https://giving.mskcc.org

William Saunders McMullian, of Marianna Florida, passed away on February 23, 2022 in New York City. The son of the late Andrew Jackson McMullian and the late Willie Ross McMullian, born on July 6, 1940, was delivered by his grandfather, the... View Obituary & Service Information

The family of William Saunders McMullian created this Life Tributes page to make it easy to share your memories.

Send flowers to the McMullian family.