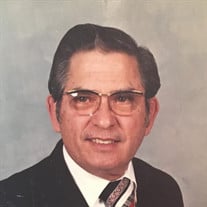 Troy E. Tidwell, 97, of Marianna, went to be with our Lord on Monday, April 5, 2021. He was born December 19, 1923 to Mary Ocie and Archie Hinson Tidwell.  He attended Malone High School and began work at the Florida Farm Colony in Gainesville in 1941.  After marrying the love of his life, Lucile Baxter on December 19, 1941, they moved to Marianna in 1943.  Troy began working for the Florida School for Boys (later named the Dozier School for Boys) in May 1943.  Lucile worked at the Boys School before being employed at Rhyne’s Kindergarten, Kiddie Cottage, and attorney John Rawls.  While working at the Boys School, Troy taught boys how to barber, ran the canteen, worked in the finance office, was a cottage parent, and retired as Homelife Supervisor in April 1982.  He and Lucile had two children, Ritchie, of Columbia, S.C., and Kay Nichols, of Marianna, FL. Many boys who were residents of FSB returned over the years to visit him with their families,  praising his assistance during their stay at the Boys School. Troy was recognized as a Paul Harris fellow in the Marianna Rotary Club in 2008.  Troy never knew a stranger and met many folks wherever he went who became friends. He was loved deeply by his family, and loved spending time with his grandchildren and great-grandchildren.  He was an avid fisherman and loved to tell fish stories.   He was a member of the First Baptist Church of Marianna for many years.   Troy was predeceased by his parents, Mary Ocie and Archie Hinson Tidwell; brothers, Paul, A.H., and Hartford Tidwell; three sisters, Stella Glass, Irene Helms, and Montez Helms,  his loving wife, Lucile Baxter Tidwell, and infant son, Troy, Jr. Troy is survived by two children, son Ritchie Tidwell and wife Susan of Columbia, SC.,  and daughter Kay Nichols of Marianna; four grandchildren, Ryan Tidwell and wife Claire of Lexington, SC, Jaret Tidwell of Charlotte, NC, Tiffany Pippin and husband Chad of Milton, FL, and Chris Nichols of Sacramento, CA; four great-grandchildren, Keaira and Kealyn Pippin, and Jackson and Corinne Tidwell; and several nieces and nephews.  Services will be held at 2 PM Saturday, April 10, 2021 at the First Baptist Church in Marianna, Florida with Pastor Lavon Pettis and Rev. Vince Smith officiating. Internment will follow in Friendship Baptist Church Cemetery in Malone Florida with James & Sikes Funeral Home Maddox Chapel directing The family will receive friends one hour prior to the service at the First Baptist Church in Marianna. Flowers will be accepted or those wishing may make memorial contributions in his memory, to Evangel Church at 4792 US 90, Unit A, Marianna 32446 The family requests that all friends and family adhere to social distancing guidelines and wear a mask.

Troy E. Tidwell, 97, of Marianna, went to be with our Lord on Monday, April 5, 2021. He was born December 19, 1923 to Mary Ocie and Archie Hinson Tidwell.  He attended Malone High School and began work at the Florida Farm Colony in Gainesville... View Obituary & Service Information

The family of Troy E. Tidwell created this Life Tributes page to make it easy to share your memories.

Send flowers to the Tidwell family.