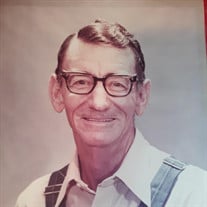 Robert Raymond Worrell, 99, of Chattahoochee, Florida died Friday, February 12, 2021 at his residence. He was born January 4, 1922 in the Alliance Community to Rufus and Lizzie Owens Worrell. Robert was a self-employed Master Carpenter and... View Obituary & Service Information

The family of Robert R. Worrell created this Life Tributes page to make it easy to share your memories.

Send flowers to the Worrell family.