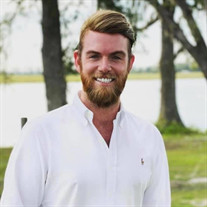 Morgan David Sykes, 27, died tragically on August 26, 2021, in a single-vehicle accident in Santa Rosa, California. Morgan was born April 3, 1994, in Tallahassee, Florida to Jamie and Tammie Sykes. From his first breath in this world, he did not just march to the beat of his own drum, he danced to his own personal marching band. He had a zest and passion for life that most of us could only dream of. From a very young age, he knew exactly what he wanted and stopped at nothing to get it. He was a true Southern gentleman, fine dining and bow ties! That was highlighted while he fulfilled his role as Mr. Springtime Tallahassee, 2012. As a cowboy, he had many accomplishments. He competed with 4H and was State Champion and Southeast Regional Champion in 2011. In the reining world, he traveled the US extensively hauling for the NRHA, World Championship Title in 2012 and was the Reserve World Champion that year. In the collegiate world, he rode with IHSA for FSU and UCF Equestrian teams. At UCF, he was captain of the team and won reserve champion at the NRHA Derby in 2015. In 2016, he won the Alumni Reining at the IHSA Nationals. He earned his hospitality degree from UCF, Rosen College of Hospitality. The relationships he made during his time in college did more for him than his diploma ever could. In 2015, he took one of his most memorable trips to France, interning as the VIP coordinator, at the American Pavilion during the CANNES International Film Festival. In his career, he worked as a secret shopper with a consulting firm, held many titles at the Marriott World Center in Orlando, and managed to fall into the most desired jobs, from Nashville, Tennessee to Key West, Florida. He was the epitome of hospitality! After ten years in the industry, he had decided to make a career change. He was on a cross-country trip to pilot school training in Carlsbad, CA, that he called, “the vacation of a lifetime!”. He was able to check off a few more states on this trip to bring his total visited to 49. He never made it to Alaska. If he wasn’t working, he was wining, dining and traveling. He traveled to London, Bali, Dubai, took private yachts to the British Virgin Islands, and spent more time on a plane than many flight attendants. "Does it spark JOY?" was a motto he lived by, and he brought joy to our lives in so many ways. He was preceded in death by his maternal grandparents, Thomas and Hazel Tyus, and paternal grandparents, James and Joyce Sykes He is survived by his parents, Jamie and Tammie Sykes; sister, Lyndsey Sykes and her fiance, Jonathan Sikes; step-grandmother, Elaine Tyus; aunts, Phyllis Daniels (Leland), Deanna Witte (Bill), and Brenda Lastinger (David); five little ones who hold a very special place in his heart, Halle, Bennett and Casen Daniels, Mateo Tarazona and Daniel Rozenblat; and a special young lady, Cienna Flores. He is also survived by his extended family and his chosen family. We will celebrate Morgan’s life on Sunday, September 12, 2021, from 2-5 PM EST, at Pebble Hill Plantation, 1251 US-319 S, Thomasville, GA 31792. A second celebration of life will be planned at Rosen College of Hospitality, UCF for a later date in hopes that each and every one of you who loved Morgan have the opportunity to join us in celebrating the vibrant life he lived. The family request that flowers be omitted but donations may be made to the Dolly Imagination Library, https://imaginationlibrary.com

Morgan David Sykes, 27, died tragically on August 26, 2021, in a single-vehicle accident in Santa Rosa, California. Morgan was born April 3, 1994, in Tallahassee, Florida to Jamie and Tammie Sykes. From his first breath in this world, he... View Obituary & Service Information

The family of Morgan David Sykes created this Life Tributes page to make it easy to share your memories.

Customized sympathy cards. Mailed for you.