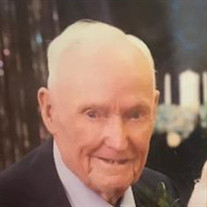 Milton M. Mooneyham, Sr., 99, of Dellwood passed away at his home on March 7, 2021 surrounded by friends and family. Milton was born in and a lifelong resident of Dellwood. He graduated from Greenwood High School in 1942. He was inducted... View Obituary & Service Information

The family of Milton M. Mooneyham, Sr. created this Life Tributes page to make it easy to share your memories.

Send flowers to the Mooneyham, family.