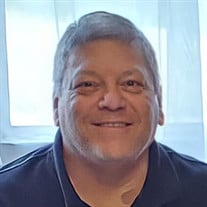 Maurice Omar Cabrera, 57, of West Palm Beach, passed away on January 31, 2021 from complications arising from Covid. He is survived by his wife Suzanne (Poirier) Cabrera, his son Alex, his daughter Rachel, his parents Patricia and Otto Cabrera, sister Regina ”Gigi” Kettering (David), brother Christopher (Ali), brother-in- laws Omer Poirier (Heather), Douglas Poirier (Lynne), 4 nieces and 2 nephews. He was predeceased by his daughter Allison. Maurice was born in Marianna, Florida on June 9, 1963. He attended Marianna High School where he excelled in the classroom and as a member of the Bulldog football and wrestling teams. He graduated fromFlorida State University in 1988 with a BS in Mechanical Engineering. Upon graduation, he was immediately hired by what would ultimately become Aerojet Rocketdyne where he would spend over 33 years. While he did spend some time working jet engine programs after joining the company, he worked as a Mechanical Designer in the Mechanical Design group supporting the RL10 rocket program for nearly his entire career. Known as a reliable problem solver who would never shy away from a tough assignment, Maurice was a very kindhearted person who everyone enjoyed spending time with. He was also involved in mentoring new professionals; helping them get up-to-speed on the nuances of the RL10 rocket engine and the engineering principles that underlie its operation. He had many dear friends through his tenure at Aerojet Rocketdyne and loved his work family. He married the love of his life, Suzanne, in 1990 and would spend the next 30 years supporting all her charitable endeavors. They met while he was volunteering at one of her fundraisers and he lovingly helped in every aspect of her work, including attending countless events and galas over the years. When time permitted, Maurice enjoyed playing golf and was an avid football fan. He enjoyed cheering for his Seminoles and never passed up an opportunity to watch a professional football game – no matter what team was playing. By far, however, his greatest joy in life was his children. He was tireless when it came to their activities and spent many happy hours attending their practices and sporting events. He was a consummate family man who is deeply loved and will be greatly missed. Graveside funeral services were conducted at 10 AM Saturday, February 6, 2021 at Pinecrest Memorial Gardens with Rev. Danny Mann officiating. James & Sikes Funeral Home Maddox Chapel directing. A celebration of his life is being planned and will be done virtual in the next few weeks. A scholarship is being created in his name so he can continue nurturing students who plan to study engineering. To contribute in Maurice’s name you can send a check to the Community Foundation for Palm Beach and Martin Counties directed to the Maurice Cabrera Memorial Fund and mailed to 700 South Dixie Highway, Suite 200, West Palm Beach, FL 33401. www,jamesandsikesfuneralhomes.com

Maurice Omar Cabrera, 57, of West Palm Beach, passed away on January 31, 2021 from complications arising from Covid. He is survived by his wife Suzanne (Poirier) Cabrera, his son Alex, his daughter Rachel, his parents Patricia and Otto Cabrera,... View Obituary & Service Information

The family of Maurice Cabrera created this Life Tributes page to make it easy to share your memories.

Maurice Omar Cabrera, 57, of West Palm Beach, passed away on...

Send flowers to the Cabrera family.