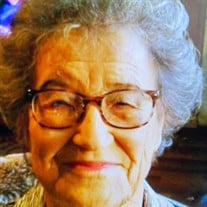 James & Sikes Funeral Home Mary Frances Cobb, 93, of Marianna died Friday, February 12, 2021 at her home. She was born in Ashford, AL. on January 22, 1928 to the late Jesse and Laura Buckhalter Barwick. She was a wonderful christian women.... View Obituary & Service Information

The family of Mary Frances Cobb created this Life Tributes page to make it easy to share your memories.

Send flowers to the Cobb family.