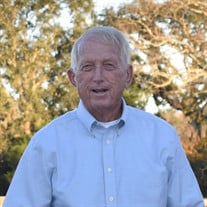 Larry Ralph Askew, 77 of Grangerburg, AL passed into his heavenly home peacefully with his family by his bedside on Tuesday, September 14, 2021.   He was born on December 2, 1943, to Royce and Flora Hall Askew.  He was a member of the graduating class of Cottonwood High School in 1961.  Larry attended Wallace College where he received a certificate in radio and television repair in 1963.  He was employed at Ft. Rucker for a few years where he worked on helicopter communication systems.  After this, he became an avid farmer for the next 51 years.  Early in his farming career, he enjoyed raising cattle and hogs.  Over the years, he grew a variety of crops from watermelons, peanuts, corn, cotton, small grain and in most recent years, hay.  He was a lifelong member of Friendship Baptist Church in Malone, FL and loved his Men’s Sunday school class. Larry was preceded in death by his parents, Royce and Flora Hall Askew, brother-in-law, Edwin Brazeal and his father-in-law and mother-in-law, James and Julia Mae Mathis. He is survived by his loving wife of 51 years, Seretha Mathis Askew; son, Michael Askew and wife, Amy of Grangerburg, AL; daughter, Christy Shores and husband, Cameron of Malone, FL; four grand joys of his life Hollie Askew, Noah Shores, Weston Shores and Shelby Kate Askew; three brothers, Billy (Rae) Askew of Highpoint, NC, Don (Voncille) Askew of Dothan, AL, Albert (Sandra) Askew of Northport, AL;  sister, Janice Brazeal of Northport, AL; three sisters-in-law, Freida (Jimmy) Fowler of Marianna, FL, Othel Hutto (Patrick) of Marianna, FL, Wanda Brown (Randy) of Slidell, LA; and one brother-in-law, Kenneth Mathis (Mary) of Cottonwood, AL. Larry was one of a kind.  He could outwork anyone.  He had zero patience for most anything and if something needed to be done, he made it happen.  He would give you the shirt off his back.  Larry was very soft hearted, but you always knew where you stood with him.  He loved playing golf and you could see him often practicing his swing in his yard.  He loved Southern gospel music and especially old hymns.  His favorite song was Heavenly Sunlight, which his daughter sang to him as he passed into Heaven.  He loved Grangerburg and farming with all his heart.  Larry's favorite sayings were "John Brown", "it ain’t worth two cents", and "shug"!  And if you knew him you’ve heard him say them.   He will be missed by his loving family but they know they will see him again.  He is healed today walking with Jesus on the streets of gold. Funeral services will be at 10:00 AM, Saturday, September 18, 2021, at Friendship Baptist Church with Ed Ham and Danny Summerlin officiating. Interment will follow at Friendship Baptist Cemetery with James & Sikes Funeral Home Maddox Chapel directing. The family will receive friends Friday, September 17, 2021 from 5:00 PM to 7:00 PM at James & Sikes Funeral Home Maddox Chapel. Pallbearers include Gregory Hall, Mitch Baxter, Rusty Murdock, Justin McCallister, Jamie Floyd and Kenneth Mathis.  Honorary pallbearers will be Rozell McKay and his entire Men’s Sunday school class.

Larry Ralph Askew, 77 of Grangerburg, AL passed into his heavenly home peacefully with his family by his bedside on Tuesday, September 14, 2021.   He was born on December 2, 1943, to Royce and Flora Hall Askew.  He was a member of the graduating... View Obituary & Service Information

The family of Larry Askew created this Life Tributes page to make it easy to share your memories.

Send flowers to the Askew family.