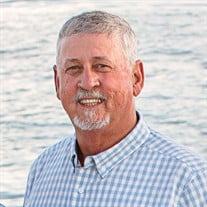 Jerry L. Neel, 65, of Sneads went home to his Heavenly Father on Thursday, October 8, 2020 at Bay Medical in Panama City.  Jerry was a 1972 graduate of Sneads High School and attended Chipola Jr. College. Jerry devoted his life to growing his family, land, and community. Throughout his life, he was known as a tireless worker, builder, and cornerstone of Sneads. After working for the State of Florida for 31 years, he retired from Sunland. Jerry was also a licensed building contractor and the owner of J & J Neel Construction and Neel Farms. He was a previous little league and pony league coach for many years in Grand Ridge, where he had the honor of mentoring and impacting the lives of young members of his community.  In all that he did, Jerry aimed to glorify the Lord. Jerry was a member of Welcome Assembly of God Church where he served as a deacon and a former Sunday School teacher. He also participated in three church building mission trips to Johannesburg, South Africa.  Jerry was preceded in death by his parents, Earnest and Ima Jean Neel and baby brother, Michael Neel.  Jerry’s quiet strength was the backbone of his family. He relished family time and never missed an opportunity to cheer on his grandchildren in extracurricular activities. Survivors include his devoted wife, Susie Neel; his children, Jeremy Neel (Tasha),  Jeannie Downum (Nekia), Jerris Edwards (Heath); grandchildren, Madeline Wright, Hunter Edwards, Berklee Neel, Kinlee Edwards and Raigan Neel; brother Ronnie Neel (Vanessa) and nephew Zachary Neel;  sister Leslie Strickland (Mitch); uncles Jim Neel, Buddy Neel, and Troy Neel;  aunts Esther Manning and Mattie Williams;  sister-in-law Sandy Bigelow;  special family friend Joe Mooneyham; too many special family members and friends to count.   Funeral services will be at 4 pm on Sunday, October 11, 2020, at Welcome Assembly of God Church with Pastor Steven Subel and Rev. Juno Douglas officiating. Interment will follow in the church cemetery with James & Sikes Funeral Home Maddox Chapel directing.  The family will receive friends from 5-7 pm, Saturday, October 10, 2020, at the home of Jerry and Susie Neel.

The family of Jerry L. Neel created this Life Tributes page to make it easy to share your memories.

Send flowers to the Neel family.