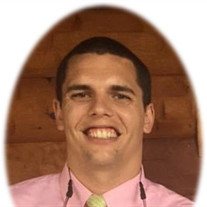 Jaren Scott Bannerman went to be with the Lord on the afternoon of May 26, 2021.  He left behind a loving wife and two precious children, other family and friends who loved him dearly. Jaren was born to Scott and Melinda (Mendy) Bannerman on October 14, 1992 in Marianna, FL. He was a graduate of Marianna High School, Class of 2011, where he excelled in academics and sports.  After graduation, Jaren attended Chipola College, where he studied mechanical engineering and was a valued member of the Chipola Indians Baseball team and was voted Mr. Chipola.  After graduating Chipola, Jaren continued his academic pursuits at the University of Florida.  Jaren earned a Bachelor’s Degree in Mechanical Engineering and Aerospace Engineering, Class of 2016.  Jaren also earned his Master’s Degree of Mechanical Engineering and Entrepreneurial Leadership from the University of Florida.   While working on his Bachelor’s Degree, Jaren earned Internship positions at Robbins Air Force Base in Warner Robbins, GA and Lockheed-Martin in Orlando, FL.  He was hired on full-time by Department of Defense, Robbins AFB following graduation.  He and his family remained in Georgia until they returned home to Graceville, FL in 2020.  Jaren then continued his career in engineering with the Department of Defense at Ft. Rucker. Jaren married to the love of his life, Cierra (Corbitt) Bannerman on May 23, 2015.  Jaren and Cierra have two precious children, Charlcee-Grace, 3 years old, and Crixus Jobe, 2 years old.  Jaren was a loving and devoted husband and father.  He loved spending time with his wife and children, playing video games, learning new things, cooking delicious meals, working out and woodworking.  Jaren enjoyed creating so much so that in February 2021, Jaren had started his own business, Seamless Builds, where he built functional, timeless pieces of furniture.  Jaren has been a faithful servant of Our Lord and Savior and loved spending time with the Lord. It was important to him for his family to know and spend time with the Lord and he witnessed to many people during his servant ship. Jaren has one brother, Gage, who he loved dearly.  They spent many hours playing video games, mentoring him in baseball and water activities while Jaren was a lifeguard for six years and coaching baseball.  Jaren also enjoyed traveling with his parents and grandparents and going hunting with his dad, paw-paw and brother.  Growing up, Jaren was fun-loving, athletic and inquisitive, enjoyed spending time with his friends.  As he grew older he enjoyed collaborations and discussion on topics he was passionate about. Jaren is survived by his wife, Cierra & children, parents, Scott & Mendy Bannerman, and brother, Gage, Marianna, FL, his grandparents, Buddy & Sharon Bannerman, Marianna, FL, Grandmother Linda Mills Hunt, Athens, AL, his parents-in-love, Wayne & Sherri (Cook) Williams, Graceville, FL, brother-in-law, John Jobe Corbitt, Graceville, FL, numerous aunts and uncles, Debbie Mathewuse, Nancy & Gary Tew, Susan & Rance Massengill, Kathy McCrary & Rodney Carpenter, Laurie & Greg Massengill, cousins, Kristin & Joe, Kelley & Jason, Kevin, Courtney & Troy, Chelsey, Brandon & Kristen, and numerous more & a niece Kellyn Corbitt, Aunt Amy Hillabrand and son, Jacob (Jana); aunt Tammy Green (Randy) and children, Ezekiel and Trinity;  and many friends. Jaren was preceded in death by his paternal great grandparents Ralph & Lucille McCain, Ocala, FL, paternal great grandparents Daddy Bob and Ma’ree Bannerman, Tallahassee, FL maternal great grandparents Arthur Mills, Jr & Hattie Gladys Mills, Logansport, IN. A Funeral Service and Celebration of His Life will be at RCC, Marianna Campus on Saturday, May 29, 2021 at 10 a.m. James & Lipford/James & Sikes  Funeral Homes will direct.

Jaren Scott Bannerman went to be with the Lord on the afternoon of May 26, 2021.  He left behind a loving wife and two precious children, other family and friends who loved him dearly. Jaren was born to Scott and Melinda (Mendy) Bannerman on... View Obituary & Service Information

The family of Jaren Scott Bannerman created this Life Tributes page to make it easy to share your memories.

Jaren Scott Bannerman went to be with the Lord on the afternoon...

Send flowers to the Bannerman family.