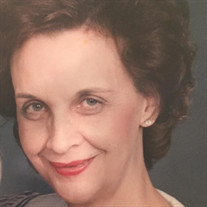 Janet Mae Moneyham, 89, of Marianna entered into eternal rest on Sunday, January 9, 2022 at Jackson Hospital.  She was born on January 8, 1933 in Evansville, Indiana, the daughter of John W. and Georgia Geisz.  She graduated from Baker Grade School and Central High School in Evansville, Indiana, and earned her B.S. and M.S. degrees from Indiana State University in Terre Haute, Indiana. She taught school for 13 years in Crawfordsville, IN; Norwalk, CA; Hawthorne, FL; and Marianna, FL.  Janet was a loving wife, mother, grandmother, sister and dearly loved her entire family.  She was a 62 year Golden Club member of the First United Methodist Church in Marianna and the Clifford Abbott School Class, re-named "The Upper Room" Class.   She was President of the class four times and was also a member and past President of the United Methodist Women. Janet really enjoyed church work and Bible Studies and was chairman of the Prayer Shawl Ministry.  She loved cooking.  She also loved baking raisin bread and knitting lacy scarves and shawls for family and friends.  Janet worked several years at the Faith Health Clinic and served several years on the Board of Directors for the Gator Club. She was preceded in death by her husband, Waymon; her parents; a still-born baby boy; and a sister, Ann Geisz. Janet is survived by her son, John Perry Moneyham and wife, Julie of Panama City; daughter Janet Lynne Booth, of Carmel, Indiana; grandchildren, Melanie and Joseph Booth and Jared and Eric Moneyham; sister-in-law, Elizabeth Spence of Marianna, niece, Kelly Connolly and nephew, Steven Spence, both of Marianna; along with other cousins and friends. Funeral Services will be at 2 o'clock in the afternoon, Thursday, January 13, 2022 At The First United Methodist Church with Reverend Dr. Nathan Attwood officiating. Interment will be in Riverside Cemetery with James & Sikes Funeral Home Maddox Chapel directing. The family will receive friends Thursday, from 12:30 PM until 1:30 PM  in the Wesley Center at First United Methodist Church. In lieu of flowers, memorial donations may be made to "The Upper Room" Class of The First United Methodist Church.

Janet Mae Moneyham, 89, of Marianna entered into eternal rest on Sunday, January 9, 2022 at Jackson Hospital.  She was born on January 8, 1933 in Evansville, Indiana, the daughter of John W. and Georgia Geisz.  She graduated from Baker Grade... View Obituary & Service Information

The family of Janet M Moneyham created this Life Tributes page to make it easy to share your memories.

Send flowers to the Moneyham family.