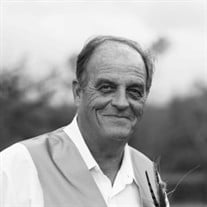 Jack Randall “Randy” Wright, 67, of Marianna died Saturday, February 5, 2022 at Flowers Hospital. Randy was born in Marianna to Jack and Martease Wright. Randy graduated from Marianna High School and then started his career as a truck driver, driving a log truck for his family's trucking business in Baker Hill,  AL.  He then spent several years serving as a Florida D.O.T. officer where he made friendships he cherished for all of his life.  He eventually made his way back to trucking, where he continued the rest of his days traveling across the United States to the beat of his own drum! Randy’s best days, however, were spent fishing the day away or following his beloved bird dogs across the fields of Nebraska with his best shooters beside him. There wasn’t a single encounter with Randy that you weren’t going to hear a good story and be guaranteed to walk away with a smile. He was full of life and loved with an open heart. To his granddaughters and nephews, he was their biggest fan, whether he was cheering from the audience, or shouting from the sidelines. He was indeed a professional babysitter to them as well, and you never knew what was going to come of their time together! He was a master of working his way out of tight spots and anyone that knew him, knows just how true that statement is. Every day was a good day to Randy, and he had a funny way of showing up right when you needed him. He firmly believed that anything that was broke could absolutely be fixed with a piece of Gorilla Tape or a can of ether,  and if that didn’t work, it couldn’t be fixed.   He is preceded in death by his parents, Jack & Martease Wright; brother, Robert Lawrence "Bobby" Wright. He is survived by his daughter, Leslie Wright Hall (Brent); granddaughters, Madison and Makinley Hall; sister-in-law, Teresa Wright; special nieces, Tiffany and Brandi Wright; nephews, Levin Wright and Miller Price, all of Marianna; his cousin, Michael Odom. Funeral services are at 3:00 p.m. Thursday, February 10, 2022 at James and Sikes Funeral Home Maddox Chapel with Gary Cook officiating. Interment will follow in Pinecrest Memorial Gardens with James & Sikes Funeral Home Maddox Chapel directing. The family will receive friends from 2:00 P.M. until the time of service. Expressions of sympathy may be made at www.jamesandsikesfuneralhomes.com  Flowers accepted or memorials may be made to Pheasants Forever.  Contact the family concerning donations.

Jack Randall &#8220;Randy&#8221; Wright, 67, of Marianna died Saturday, February 5, 2022 at Flowers Hospital. Randy was born in Marianna to Jack and Martease Wright. Randy graduated from Marianna High School and then started his career as a... View Obituary & Service Information

The family of Jack Randall "Randy" Wright created this Life Tributes page to make it easy to share your memories.

Send flowers to the Wright family.