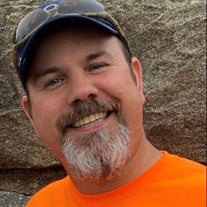 Isaac H. "Ikey" Perkins, 47, entered into the loving arms of his Savior on Thursday, August 12, 2021 at Jackson Hospital. Ikey was a member of Sneads Assembly of God church, where he served faithfully in many capacities. Lovingly known as "Ikey", Isaac H. Perkins (whose name means laughter) was known and loved for his ability to instantly light up a room. If you met him, you liked him. If you knew him, you loved him. His goofy personality would bring light and laughter to even the darkest days. He loved to fish, hunt, and be outdoors. He was very artistic whether it be drawing, painting, or woodworking. He was currently employed in the security department at Florida State Hospital. His coworkers said about him, "he brought a lot of fun to our department in keeping us entertained and laughing. He was a pleasant person who had great morals with a godly character that shown wherever he went". Ikey received his healing not as we had hoped, but he would say to us all today, "DO NOT LET YOUR FAITH BE SHAKEN"! Ikey had a very close and special relationship with his sweet mama. He loved his God and he loved his mama! In 1998, Ikey married his high school "sweetness" and the love of his life, Vanessa. Just a few short years ago, God blessed him with his greatest gifts of all - his two beautiful children, Alex and Grace. His family was the apple of his eye and his entire world. Ikey was saved at a young age and lived his life with the Lord at the center of everything. He was preceded in death by his father, Robert G. Perkins and infant brother, Donal G. Perkins. He is survived by his wife of almost 23 years, Vanessa C. Perkins; son, Alexander Paul "Alex" Perkins; daughter, Grace Anna Perkins; his mother, Patsy A. Perkins of Grand Ridge; two brothers, Robert "Ricky" Perkins and wife, Tina of Grand Ridge, and William "Mickey" Perkins and wife, Trish of Sneads; three nieces, Christina Perkins, Lauren Smith, Anna Jackson; four nephews, Justin Perkins, Will Perkins, Isaiah Perkins, Jase Smith; two great-nieces, Claire Perkins, Chloe Perkins; special friends, Devin and Brittany Graham, Kadence and Grayson; and a host of loving aunts, uncles, and cousins. Funeral services will be Wednesday, August 18, 2021 at 10:00 AM at Sneads Assembly of God with Reverends Juno Douglas, Johnny Ray Fontenot and Jason Lewis officiating. Private interment will be in Angel Rest Cemetery in Grand Ridge, Florida with James & Sikes Funeral Home Maddox Chapel directing. Family will receive friends, Tuesday, August 17, 2021 from 5:00 to 7:00 PM at Sneads Assembly of God Church.  It is requested that social distancing be adhered to and masks be worn.

Isaac H. "Ikey" Perkins, 47, entered into the loving arms of his Savior on Thursday, August 12, 2021 at Jackson Hospital. Ikey was a member of Sneads Assembly of God church, where he served faithfully in many capacities. Lovingly known as... View Obituary & Service Information

The family of Isaac "Ikey" Perkins created this Life Tributes page to make it easy to share your memories.

Send flowers to the Perkins family.