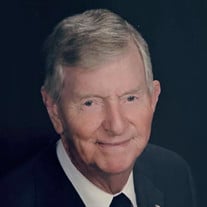 Harry “Hap” Wilson Dunaway, age 92, of Greenwood, Florida passed away Friday evening, January 29, 2021, at Pruitt Healthcare Southwood in Tallahassee, Florida after contracting COVID-19.   Hap was born July 1, 1928 in Greenwood, Florida, to the late Omie Cortez Dunaway and Sarah Edel Dickson Dunaway and was a life-long resident of Jackson County, apart from his military service and a brief time residing in Pensacola afterward.  After graduating from Greenwood High School where he was a member of the state tournament basketball team, he joined the Army.  He served in the US Army Air Force through its transition to the US Air Force and was stationed at Goose Bay, Labrador, Canada, and at Arlington, Virginia, working at the Pentagon.  After his military service he lived in Pensacola, working for National Air Lines, and later returned to Marianna and worked for the Production Credit Association (PCA) prior to joining Ormond Insurance Agency/Florida Land Title and Trust.  He retired as Vice-President of Florida Land Title and Trust Company in Marianna, Florida after over 30 years of employment. In 1950 he married Josephine Irene “Jorene” Moore and their marriage flourished for nearly 65 years until her death in 2015.  He was a dedicated husband and father.  He loved the beach and often took his family to vacation at Beacon Hill Beach and camping at St. George Island and Cape San Blas.  Prior to his wife’s passing in 2015, Hap and Jorene enjoyed travelling the country, especially the Smokey Mountains, playing dominos with their circle of friends, and spending time with their children, grandchildren, and extended family.   The Dunaway’s were long-time members of St. Luke’s Episcopal Church in Marianna where Hap served in the capacity of Sr. Warden, Jr. Warden, vestryman, and lay reader. Hap was a patriot who had a deep appreciation for our nation and its history.  The descendant of patriots serving in the American Revolution, he was a charter member and first president of the William Dunaway Chapter, Florida Society, Sons of the American Revolution; a charter member and past president of the Tri-State Chapter, Alabama Society, Sons of the American Revolution; and member of the Color Guard of both the Florida and Alabama chapters.  Hap was a past state President of the Florida Land Title Association, past Vice-President of the Chipola Historical Trust, past District Vice-President of the Florida State Elks Association and past Exalted Ruler of the Marianna Lodge No. 1516, B.P.O.E. In addition to his parents, Hap is preceded in death by his siblings, Omie Cortez “O.C.” Dunaway, Jr., Bryant Dunaway, Flora Dunaway Cook, and his beloved wife, Jorene.    Hap is survived by his brother Kenny Dunaway, Greenwood, Florida; his children, Sonny Dunaway and wife Cindy of Havana; John Omie Dunaway of Panama City Beach; Mike Dunaway and wife Holly of Tallahassee; and Jim Dunaway and wife Carol of Marianna; nephew Scott Dunaway, Utah and niece Elizabeth Goodwin, Marianna; nine grandchildren and four great grandchildren.  A graveside service will be held for family and friends on Monday, February 8 at 11:00 a.m. at Pinecrest Memorial Gardens, Caverns Road, with James and Sikes Funeral Home Maddox Chapel directing.  A public memorial service will be planned for a later date. In lieu of flowers, the family request donations be made to the Chipola Historical Trust, 2305 Fillmore Drive, Marianna, FL  32448, in his memory. Expressions of sympathy can be made online at www.jamesandsikesfuneralhomes.com

The family of Harry W. Dunaway created this Life Tributes page to make it easy to share your memories.

Send flowers to the Dunaway family.