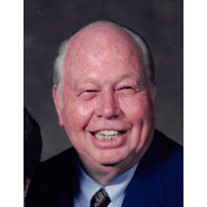 On December 28, 2016 Mr. Daun Crews of Marianna, Florida was called to heaven by his Lord and Savior. Mr. Crews was born on May 20, 1932 in Campbellton, Florida and moved to Marianna during his childhood years. A devout Christian, Mr. Crews (Better known to his schoolmates and friends as "Baby Daun" or "Babe") was a life-long and active member of the First Presbyterian Church in Marianna having served as a Deacon and Elder on numerous occasions. He was a graduate of Marianna High where he was selected as an All-State Football player. Known for his tenacity on the field, it was his kind heart, infectious smile and personality that attracted others to him. After graduating Mr. Crews enlisted in the US Army and served as a Master Sgt. in the Military Police while stationed in Hawaii. After returning from military duty he began working with the Sealtest Milk Company eventually becoming the plant manager for a number of years. After a short stint away from Marianna, Mr. Crews returned home and began working with the Jackson County School Board where he was the Director of Facilities and Plant Management. Mr. Crews continued his work with the school board until 1980 when he was elected as Clerk of the Circuit Court and served for 16 years until his retirement in 1996. Daun loved serving the people of Jackson County as Clerk and often said he felt like this was his true calling, being able to help others and serve his community. Mr. Crews was active in many civic organizations throughout the years.  None he was more proud of than being a member of the Marianna Lions Club for 50 plus years.  The Veterans and Gideons were all worthy causes that Mr. Crews spent his life donating his time too. On July 19, 1952, Mr. Crews' life changed forever when he married his one and only Sweetheart, Christine Medlock. Their unconditional and unwavering love for each other was evident every day throughout their 61 plus years of marriage. Whether traveling, going out to eat with family and friends or a quiet night at home, their hearts were bound together that withstood the test of time. For those that knew them the best, know that a significant part of Daun was lost as well when Christine passed away on January 29, 2014.  While her physical presence was gone, her spirit lived on and through him for the rest of his life. There was no secret that Mr. Crews' foundation and life were based on his faith; his family; and his friends. He received no greater joy than that he received from spending time with his family and friends. At the top of that list, were the years he and Christine spent with their two beautiful granddaughters, Jennie Strickland and Kelly Crews. Traveling around the country, birthday parties, Christmas, it didn't matter as long as those two apples of his eye were there. Throughout the last few years Mr. Crews had come to rely heavily on this son Michael and Daughter-In-Law Teri. Daun always thought of Teri as his own daughter and loved her from the bottom of his heart and the time they spent together whether doctor appointments or a ride for a milkshake will be memories we will always cherish. He and Michael shared a father and son bond that was unimaginable! Best Friends for life and as Michael use to tell people, "he was my one and only HERO." Mr. Crews was preceded in death by his wife, Christine; survived by his son, Michael (wife Teri); two granddaughters, Kelly Elizabeth Crews, Jennie Crews Strickland (husband Razzie); one great grandson, Lawson Razzie Strickland. He is also survived by many nieces and nephews who were a significant part of his life that he loved dearly. The family will receive friends on Monday, January 2, 2017 from 4:00-6:00pm CST at the James & Sikes Funeral Home Maddox Chapel.  Graveside funeral will be at Riverside Cemetery on Tuesday, January 3, 2017 at 10:00am CST. with Rev. Terry Gregory officiating.  In lieu of flowers, the family has requested, contributions be made to any of the following; First Presbyterian Church of Marianna, 2898 Jefferson St., Marianna, FL 32446; Big Bend Hospice, 1723 Mahan Center Blvd., Tallahassee, FL 32308 or Boy Scouts of America, 6801 West Main St., Dothan, AL 36305. Condolences may be made on line at www.jamesandsikesfuneralhomes.com/obituaries

On December 28, 2016 Mr. Daun Crews of Marianna, Florida was called to heaven by his Lord and Savior. Mr. Crews was born on May 20, 1932 in Campbellton, Florida and moved to Marianna during his childhood years. A devout Christian, Mr. Crews... View Obituary & Service Information

The family of Daun Crews created this Life Tributes page to make it easy to share your memories.

Send flowers to the Crews family.