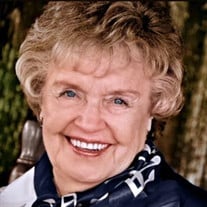 The Lord welcomed Daisy Manning home on October 31, 2020. She was 90 years old. Daisy was born into the farming family of Lonnie (LB) and Bessie Register on June 21, 1930, during the Great Depression. She was the youngest of seven children and lived in the rural Nokomis community in northern Escambia County, Florida. Her father taught singing schools, wrote gospel music, the family sang at revivals and were avid Convention (Seven Shape-Note) Gospel Music singers, which ignited her lifelong love of music and Convention singing.  She overcame many childhood illnesses to graduate from Walnut Hill School in 1947 at 16 years old. She competed for and won a fully paid teaching scholarship to Florida State University, which she earned by scoring in the top two of all Escambia County students on an academic test.  She entered FSU the first year it became Co-Ed, and voted to choose the mascot, colors and motto. She graduated from FSU in 1951 with a BS in English.  She took a job offer in Ponce de Leon, FL, and always stated that the first moment she entered her classroom, she felt at home. Her first and only teaching assignment was at Ponce de Leon High School, where she taught high school English and was senior class sponsor from 1952-1984.  Teaching was her calling and her God-given talent. During her first year in Ponce de Leon, she met Baker Manning. They became engaged three weeks later and married in 1952. Baker and Daisy had two children, Marcus Willard, and Leesa Hope. They were active participants in school and community events and were members of Northside Baptist Church where she taught Sunday School, sang, and played the piano. They enjoyed traveling, camping, and laughing together.  Baker became disabled in 1980, but they continued to enjoy life to the fullest as she helped him through his illness.  Following Baker’s death in 1988 she moved to Bonifay to be with her family. Her grandchildren greatly enriched her life, as she did theirs, and she loved watching their sports, church, and school activities. She joined the Woman’s Club, Garden Club, served on the Library Board, and joined First Baptist Church.  She met Eiland Helms at a Gospel Sing, and they married in 1990.  She also served as Florida State Singing Convention President and held various offices during this time. After 13 joy-filled years, Eiland “Papa” died in 2003.  Daisy moved to Bethlehem to live beside her daughter and family in 2004 and was a vital part of their lives. She was immensely proud of all her grandchildren and great-grandchildren.  She loved to travel and met Bill Faulk at a Gospel Sing and they married in 2009. They resided in Dothan, AL until health issues occurred and she moved back home to Bethlehem in 2013. Her family was thrilled to be able to “Drive Miss Daisy” once again. She went to almost every ball game her grandchildren and great-grandchildren played and was still attending their baseball games in March of this year, at the age of 89. They loved hearing their Mimi cheering them on.  She celebrated her 90th birthday surrounded by family and was showered with calls, cards, and gifts from generations of former students and friends. “Mrs. Manning”, as she continued to be known throughout her life, was an outstanding and compassionate teacher who loved her students. She remained friends with many of them and no matter how many years had passed, she remembered each one, where they sat and details about their school years. Mrs. Manning missed very few PDL Homecomings and loved visiting with “her kids”. She was preceded in death by her parents, her six siblings, her husbands, Baker Manning, Eiland Helms and Bill Faulk, many relatives, students, and friends. She is survived by her daughter and son-in-law, Leesa and Dennis Lee of Bethlehem, FL; her son and daughter-in-law, Marcus and Edith Manning of Cantonment, FL; seven grandchildren, Melanie Walker, Blossom Owens, Zachary Lee, Savannah Lee,  Dillon Lee, MaeLynn Manning and LeeLee Manning; and three great-grandchildren, Austin Owens, Maggie Walker and Chase Owens.  She is also survived by her best friend, Cora Morrow Hicks of Ponce de Leon, and her faithful dog, Lola.  A private graveside service will take place at the Old Ponce de Leon Cemetery, with James and Sikes Funeral Home Maddox Chapel directing. A Celebration of Life service will be announced in 2021. The Daisy Manning Scholarship is being established and donations will be accepted. It will be awarded each year to a Ponce de Leon senior who is majoring in education. Details regarding Daisy Manning’s Celebration of Life as well as The Daisy Manning Scholarship will be published when finalized.

The Lord welcomed Daisy Manning home on October 31, 2020. She was 90 years old. Daisy was born into the farming family of Lonnie (LB) and Bessie Register on June 21, 1930, during the Great Depression. She was the youngest of seven children... View Obituary & Service Information

The family of Daisy Manning Faulk created this Life Tributes page to make it easy to share your memories.

Send flowers to the Faulk family.