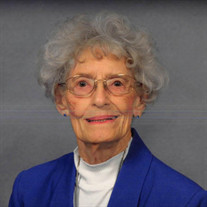 Daisie’s mother, Gladys chose such a perfect name for her new baby girl in the summer of 1931. She was such a precious child that her mother wanted a special name and unique spelling to gift her new baby girl. The meaning behind the flower, Daisy is purity and innocence - that certainly described Daisie. Sadly, Daisie passed away at her home surrounded by her loving and supportive family on Saturday, April, 18, 2020. Heaven gained an angel, but her loss is felt so deeply by her family, friends and all who were lucky enough to get to know this special woman. She began her early life in the town of Aurora, Indiana surrounded by a loving and extended family. She was very proud of her German and Irish heritage and was finally able to take the trip of a lifetime in the fall of 2008 visiting the homelands of her ancestors. She had an exciting time exploring the countries of Germany, Great Britain, Italy, Ireland and Sweden. She must have been a favorite of her teachers as she was always ready to open a book and learn something new. She could often be found in her favorite recliner deep in concentration with a book in her hand. Always ready to test her knowledge, she would rarely miss an afternoon episode of her favorite TV show, Jeopardy. Always ready to lend a helping hand, Daisie devoted many of the fifty years she lived in Marianna to serving others in many different capacities. Daisie served the Jackson County Hospital as a Pink Lady for 16 years. When she finally retired from her service there, she was missed for her devotion and positive can-do attitude. She was a lifetime member of The Girl Scouts of America, President of the local AARP chapter, President of The United Methodist Women’s Club, President of The Pink Ladies Jackson Hospital Chapter. She was a member of the local American Legion Aux. Post 100, Marianna Women’s Club, The United Methodist Women, The Methodist Forever Young Club (where her special pickled beets were often sought for during their luncheons). She was also a dedicated supporter of the United Methodist Children’s home. In addition to her devotion to her church, Marianna United Methodist, she was a devoted mother to Sheila Heafner of Marianna, Kathy Williams (Jack) of Cairo, GA, David Bray (Sarah) of Ocala, FL, and Carla Raines (Larry) of Sneads, FL. She was a grandmother to Carrie Hill of Marianna and Earl Moody, Jeff Heafner (Tiffany) of Fallon, NV, Jack Alex Davis (Alicia) of Coolidge GA, Alison Harvey (Tim) of Thomasville, GA, Michael Bray (Tiffany) of Naples, FL, Adam Bray (Diana) of Washington, DC, and finally Jonathan Smith of Florida. Her great-grandchildren that survive her are Nicholas Moody (Marrissa) of East Amherst, NY, Tyler Moody (Amber) of Fallon, NV, Sarah Moody, James (JD) Heafner, Michael Heafner, Annabelle Moody all from Marianna, Diya Heafner, Victory Heafner of Fallon, NV, Cayden Harvey, Aubrey Kate Harvey of Thomasville, GA, Kemeren Harper, Lady- Arwen Davis, of Coolidge, GA, and finally Tiffany E. Bray Houma, LA. She is survived by one great-great-grandchild Brysen Moody of Fallon, NV. Victor and Daisie found lasting love together in the second chapter of their lives. It was apparent to those around them they were such a perfect couple. They enjoyed picnics at the springs, reading, and enjoying classical music together in the evenings. She was preceded in death by mother Gladys Teeter, husband David V. "Dave” Bray, daughter, Kathy Bray Williams, and finally husband, Victor Schoultheis. A graveside service will be conducted at Pinecrest Cemetery with family members in attendance to honor her.  Her family, friends, and church members wish to hold a memorial in her honor at First United Methodist church which will be announced at a later date.

Daisie&#8217;s mother, Gladys chose such a perfect name for her new baby girl in the summer of 1931. She was such a precious child that her mother wanted a special name and unique spelling to gift her new baby girl. The meaning behind the... View Obituary & Service Information

The family of Daisie B. Schoultheis created this Life Tributes page to make it easy to share your memories.

Daisie’s mother, Gladys chose such a perfect name for her new...

Send flowers to the Schoultheis family.