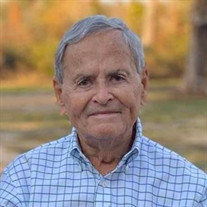 Charles Creshull Harrison, Jr. beloved husband, father, and grandfather, entered the gates of Heaven on October 13, 2020, at the age of 93. He was born in Marianna, Florida on March 18, 1927, to Margaret Belle Milton and Charles Creshull Harrison.  He attended Marianna public schools and graduated from Riverside Military Academy, Gainesville, Georgia, in 1944. Creshull attended the University of Alabama before joining the US Merchant Marines Cadet Corp for Officer training in 1945. In 1947 he re-entered the University of Alabama, where he was a member of the Sigma Alpha Epsilon fraternity. Two years later, he received a commission in the US Air Force Reserve, followed by a Bachelor’s Degree in Business Administration in 1950.  After proudly and humbly serving in the US Air Force, he retired with the rank of Captain. Creshull joined his father in the automobile business before he was called to active duty USAF in Panama City, Florida. There he met the great love of his life, Marianne Montgomery, in 1953. They were married in 1955 and returned to Marianna to begin a new chapter building their treasured family.  Faith was a cornerstone of Creshull’s life. He was a member of The First United Methodist Church of Marianna for over 80 years and served as a Chairman for both the Administrative Board and the Board of Trustees. Creshull also had a deep passion for business and leadership, serving as President of Harrison Chevrolet Company for 24 years. Creshull had a heart for serving others, particularly the local community of Marianna, and held various leadership roles within the community. Those titles include: District Vice President and  Director and Treasurer of the Florida Automobile Dealers Association, President of the Marianna Automobile Dealers, President of the Marianna Rotary Club, a Rotarian for over 70 years and a recipient of the Rotary Paul Harris Award, President of Marianna Chamber of Commerce, Chairman of the Board of SouthTrust Bank of Northwest Florida (served on the Board for 44 years), and Chairman of the Florida Board of Business Regulation. While President of the Chamber, he helped secure Sunland Training Center, a facility designed to help those with disabilities. Creshull also had a role in the development of Indian Springs Community in Jackson County, where he resided for over 24 years.  Other organizations he served in were the Florida Development Commission, Florida Land Sales Board, developer and first President of Marianna Country Club, and Original Director and Shareholder in both WTOT Radio Station and Pinecrest Memorial Cemetery.  Mr. Harrison also lovingly built the Chapel at Chipola College in Marianna, to provide college students and the community a place for restoration and worship. His deepest desire was to make Marianna a wonderful place for people and families to live and thrive. The impact of his life’s work will be felt on this community for generations to come. Creshull was an avid golfer and a self-proclaimed “hopeless putter!” He enjoyed spending time in Panama City Beach, Florida and in the mountains of Cashiers, North Carolina. Creshull will be remembered by all who knew him for his deep devotion to his Lord and Savior, Jesus Christ and for his commitment and love for his family.  He is survived by his wife, Marianne, of 65 years, his children, Margaret Anne Harrison Evans (Emmett), Charles Creshull Harrison III (Alisha), Sara Lucile Harrison Snow (Larry), and Ellyn Elizabeth Harrison Watford (Bill); eight grandchildren, Kimberly Trammell (Allen), Sarah Anne Evans, Hailey Harrison, Lauren Davis (Drew), Harrison Fant (Erin), Palmer Fant, Bryson Watford, Sam Watford, and great granddaughter Blair Elizabeth Fant.  Funeral services will be 3:00 PM Sunday, October 18, 2020 in the sanctuary at First United Methodist Church with Rev. Dr. Nathan Attwood officiating. Private internment will follow at St. Luke’s Episcopal Church with James & Sikes Maddox Chapel Funeral Home directing.  The family will receive friends from 1:30 PM to 2:40 PM in the Wesley Center at the First United Methodist Church. Those wishing to make a contribution, may be made to the First United Methodist Church, P.O. Box 1503, Marianna, Florida 32447; Methodist Children’s Home, 4001 Carmichael Road, Suite 235, Montgomery, Alabama 36106; or a charity of your choice. Expressions of Sympathy may be made online at www.jamesandsikesfuneralhomes.com

The family of Charles Creshull Harrison Jr. created this Life Tributes page to make it easy to share your memories.

Send flowers to the Harrison family.