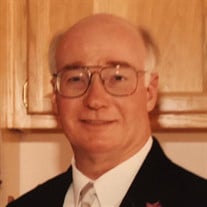 Charles Frank Cambron, Sr., 77, of Marianna, FL died Tuesday, August 4, 2020 at his residence, surrounded by his wife and children. Frank was a quiet man who loved his family, reading, studying the Bible, classical music, solving problems, and a good cigar. He worked hard his whole life to provide well for his family, and every interaction with them always ended with a sincere, “Can I do anything for you?” He especially enjoyed spoiling his grandchildren. Frank treated everyone he met with respect and dignity, and was always the consummate host, whether at his home or not. He enjoyed being a small-engine pilot, and was proud of his instrument licence. His dry sense of humor and sharp wit, which he kept up until the very end, was a source of enjoyment for all those who had the privilege of hearing him tell a story or make a joke. Frank was preceded in death by his brother, Mark Cambron; and grandparents, Frank and Ila Williams of Graceville. He is survived by his wife of 55 years, Patricia Watts Cambron; his mother, Rubye Williams Pelt; son, Charles Frank Cambron, Jr. and wife Stacey, of Beavercreek, Ohio; daughter, Carole Beth Wildes and husband David, of Albuquerque, NM; eight grandchildren, Chase, Rachel and husband Devan, Elizabeth and husband Ian, Joshua, Caleb, Xander, Lainey, and Nate; four great-grandchildren, Charlie, Saylah, Lane, and Dawson; and brother, Phillip Todd Cambron and wife Tomi of Dahlonega, Georgia. Graveside funeral service will be conducted in Shady Grove Cemetery with Reverend Gino Mayo officiating and James & Sikes Funeral Home Maddox Chapel directing. In lieu of flowers, donations may be made in his name to the Lewy Body Dementia Association, online (lbda.org/honor-memorial-gifts) or mailed to 912 Killian Hill Road SW, Lilburn, GA, 30047. Expressions of Sympathy may be made online at www.jamesandsikesfuneralhomes.com

The family of Charles Frank Cambron, Sr. created this Life Tributes page to make it easy to share your memories.

Send flowers to the Cambron, family.