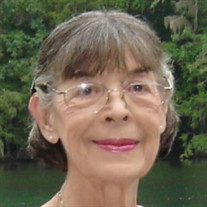 Beverly Bowles Conrad, 87, a lifelong resident of Marianna, Florida, passed away at Signature Healthcare at the Courtyard on February 16, 2020, the 16th anniversary of her husband Bruce’s passing.  Beverly was born in her childhood home at 4298 2nd Avenue to the late Will Stone Bowles and Lena Mae Gunter Bowles on November 11, 1932. As a youngster, each year when they put the flags out for Veterans’s Day, Beverly thought they were to celebrate her birthday! Beverly attended Marianna High School to the ripe age of 15 when she married Elzie Bruce Conrad, also of Marianna, in Donaldsonville, Georgia. Nine months later, her son Anthony Bruce Conrad was born. 32 months later, daughter Karen Denise Conrad was born followed by a second daughter, Beverly Blynn Conrad 14 months later. So, there’s Beverly with three young children and still only 19 years of age. Somehow through those years, Beverly was able to attend classes and obtain her GED diploma, quite an accomplishment for a young mother of three. In 1954, Bruce and Beverly’s new home at 4302 2nd Avenue was completed and the young family moved in, next door to the house Beverly had been born in 22 years earlier. Beverly was a full time stay at home mom for the next few years until all the children were finally in school. She had an opportunity to go to work for Bill Reddoch at Thrift Department Store and did so for several months. She then was offered a job at Carp’s Department Store where she was placed in charge of the men’s clothing department where she worked for several years. In 1966, Beverly became interested in politics and became the Jackson County campaign manager for Hal Davis of Quincy who was running against Don Fuqua for U.S. House of Representatives for Florida’s 2nd district. Although Beverly labored long and hard in this campaign, Mr. Fuqua prevailed and remained in office for 20 years.By now, Beverly was pregnant again and on December 15, 1966, she was rushed to the hospital in labor. A few hours later, Elizabeth Bowles Conrad was born, three months premature. The tiny girl weighed on 2.2 pounds and in 1966, our medical technology was not advanced enough to save such prematurely born children and Elizabeth survived only 32 hours. By the end of 1972, all of Beverly’s children had finally finished school and were supporting themselves. She now had time to engage herself with some of her own personal interests including gardening, bird watching, and becoming more well-read. She also had time to begin to immerse herself into many civic, county and area concerns. Beverly soon became a familiar face at city and county commission meetings where she was not the least bit shy about sharing her opinion(s) on various issues. It was soon quite evident that Beverly was not only quite opinionated but also very smart with a high energy level. By 1977, Beverly had found herself on the Board of Directors of the Jackson County Guidance Clinic and served as its secretary in 1981. This was the beginning of a flurry of volunteer work that would make most people’s heads spin. Beverly had an interest in helping people who suffered from substance addictions including alcoholism and became a board member of the Panhandle Alcoholism Council (PAC) which met in Panama City once a month. She remained a board member from 1977 to 1986, serving as its Vice President in 1977 and President in 1978 and 1979. In 1988, she was cited by the PAC for “exceptional leadership in consolidation of substance abuse services.” Like many of us, Beverly was bitten by the CB Radio bug in the late 70’s and early 80’s. In 1980, Beverly, known as “Mama Cat” on the radio was elected President of the Panhandle CB Club, an office she kept through 1981. Amidst all of this activity, Beverly became a member of the Marianna Garden Club and was eventually awarded an Honorary Membership in the organization. She also had joined the Marianna Chapter of the Audobon Society. Of course, she ended up being president of both organizations although the dates have become confused and lost along with many other plaques and certificates delineating other offices and service awards she received through the years. In 1986, Beverly (Bev) was appointed Chairperson of the Marianna Citizen’s Advisory Committee and in 1988 she was cited by the city of Marianna in appreciation for “loyal, dedicated, and unselfish service”. In 1987, Bev was the Committee Chairman for the J.P. McDaniel Christmas fund that raised money for food, clothes, and gifts for less fortunate members of our community. Bev continued to serve as a board member for CARE (Chemical Addictions Recovery Effort) which had morphed from PAC and in 1993 she was appointed President of the organization and continued to serve in that position until 1999 when she was cited for meritorious service. By the year 2000, Bev had pretty much retired from volunteer services to enjoy her gardening and bird watching including her beloved annual Audobon Christmas Bird Counts. She also had time to travel to far points of the globe such as Muscat, Oman, Cairo and many other points of interest in Egypt. She also did a 10 day safari in Kenya, a dream she had entertained since she was a young girl. But Beverly always returned to the place she loved most on Earth, 4302 2nd Avenue with her flowers, butterflies, birds, coons, possums and even the occasional deer or fox. Beverly was preceded in death by her husband, Elzie Bruce and daughters, Elizabeth Bowles  Conrad and Beverly Blynn Conrad Young. She is survived by her son, Anthony Bruce Conrad and his wife, Jean Tawa of Marianna; her daughter, Karen Denise Conrad of Panama City; grandsons, Casey Conrad of Phenix City, AL, and Conrad Young of Panama City; great granddaughters, Emily Conrad of Phenix City, AL and Olive Young of Panama City. Funeral service will be 2 pm Thursday, February 20, 2020 at James & Sikes Funeral Home Maddox Chapel. The family will receive friends one hour prior to the service at James & Sikes Funeral Home Maddox Chapel. In lieu of flowers, memorial contributions may be made online to the National Audubon Society at www.audubon.org

Beverly Bowles Conrad, 87, a lifelong resident of Marianna, Florida, passed away at Signature Healthcare at the Courtyard on February 16, 2020, the 16th anniversary of her husband Bruce&#8217;s passing.  Beverly was born in her childhood home... View Obituary & Service Information

The family of Beverly Bowles Conrad created this Life Tributes page to make it easy to share your memories.

Send flowers to the Conrad family.