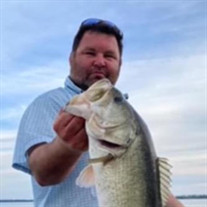 Robert “Allen” Childs of Grand Ridge, Florida was called to his heavenly home Saturday, September 18, 2021, with his family by his side. He was born on November 7, 1976, to Eddie and Sharon Childs. Allen graduated from Grand Ridge High School in 1995. Allen had a passion and love for sports. He coached many sports for many years instilling life lessons into his athletes. In Allen’s 44 years he accomplished more than most people will in 100. Allen will go down as a legend, and his legacy will live on forevermore in the innumerable lives he impacted. He was a farmer, businessman, coach, friend, husband, father, son, brother and much more. Allen was selfless man. He would always lend a helping hand to others and never expected any recognition. He would give the shirt off his back and his last dollar to a stranger that he felt was in need. Anyone who knew Allen would know that his Monday crew, which he called the “A Team”, could go from farming, to land clearing, to pulling houses, all in one day. He had pride in everything he did. What would be good enough for the average person was never good enough for Big A. He instilled these values and strong sense of work ethic in his staff and every baseball player he coached throughout the years. These standards allowed him to excel in life making him the largest squash grower in North Florida, landing his products in every Publix in the nation. He was faced with an inevitable challenge at a young age with the passing of his father. With determination and hard work, Allen surrounded himself with outstanding people who helped to put him at the top. The diversity and expansion of the businesses created opportunities to engage his family in the Spanish Trail Farms operation. Allen was preceded in death by his father, Eddie Childs; paternal grandparents, Bay and Ella Mae Childs; maternal grandparents, Robert and Nadine Demont.  He is survived by his loving wife of 26 years, Keesha Childs; son, Trenton Allen Childs; daughter, Baylee Childs Mayo and husband, Briar Mayo; daughter, Ella-Ann Childs; son, Nate Childs; son, Patto Villafuerte Childs and Eithan Vallafuerte; expecting his first granddaughter in February; mother, Sharon Childs; brother, Gene Childs of Grand Ridge; sister, Missy and husband, Bubba Rogers of Greenwood; uncle, Walter Childs of Grand Ridge; and nieces, Karissa Childs, Megan Hand (Cameron), Ansley, Gracie, and Kinlee Harris and nephew, Tristan Rogers; special friends, Richard Jackson, Mac Edenfield, Robert Jackson, Bobby Johnson, JR Moneyham, and Jeff Russel of Grand Ridge.  Funeral Services will be at 2:00 PM on Wednesday, September 22, 2021, at Evangel Church with Tony Buczek and Kelvin Johnson officiating. Interment will follow at Childs’ Memorial Family Gardens with James & Sikes Funeral Home Maddox Chapel directing.  The family will receive friends Tuesday, September 21, 2021, from 5-7 PM at Evangel Church.  Pallbearers include Richard Jackson, Mac Edenfield, Neel Rivers, JR Moneyham, Dalton Bennet, Shawn Woods, Bobby Johnson, and Jeff Russel. Honorary pallbearers Timmy Rabon, Lee Finch, Chris Young, Greg Nable, Jamie Hewett, Scott Taylor and Beaver Yoder.

Robert &#8220;Allen&#8221; Childs of Grand Ridge, Florida was called to his heavenly home Saturday, September 18, 2021, with his family by his side. He was born on November 7, 1976, to Eddie and Sharon Childs. Allen graduated from Grand Ridge... View Obituary & Service Information

The family of Allen Childs created this Life Tributes page to make it easy to share your memories.

Robert “Allen” Childs of Grand Ridge, Florida was called to his...

Send flowers to the Childs family.